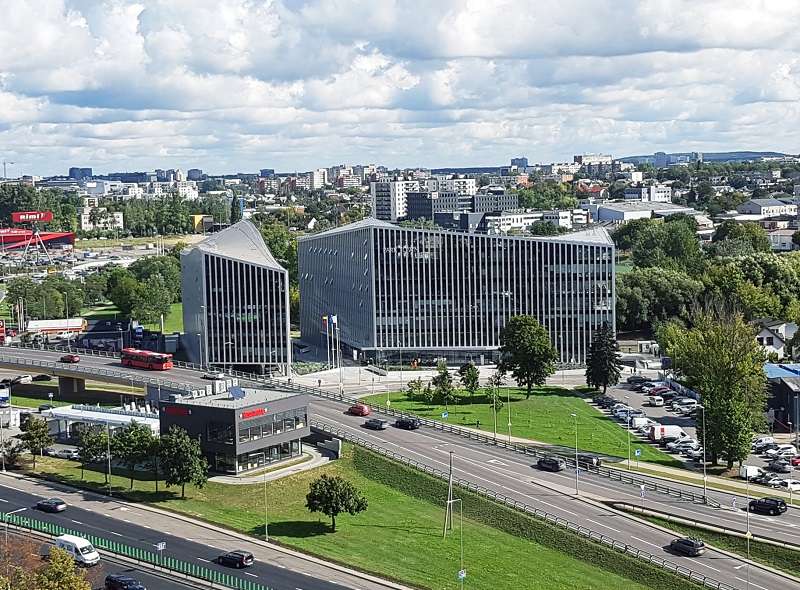 Driven by strong demand the modern office premises sector continues to grow. However, any significant changes in the office space sector in the country are actually only evident in the country’s two major cities, Vilnius and Kaunas.

Although it was expected that 2019 would see a record number of offices built in the city, the completion of some projects was brought forward to 2020. In view of the progress of current projects under construction it can be concluded that during 2020 the area of new offices premises to be introduced to the Vilnius market will be largest in history accounting for no less than 95,000 sqm.

Despite the continued strong demand for office space and record high occupancy rates, the abundant supply of new premises injected into the capital’s market every year has substantially stabilized office rents which have grown only marginally since 2015. The year 2019 was no exception, when the rents for offices increased on average by 1-2%. According to Ober-Haus, at the end of the year rents for B class offices were 9.0-13.5 EUR/sqm, and 14.0-16.7 EUR/sqm for A class offices.

Despite the significant volumes of office space projected for 2020, and considering the pre-lease contracts concluded regarding the projects under construction the situation in the office sector is expected to remain fairly balanced this year. It is hard to expect any faster increase in office rents, as despite the growth in construction costs, developers will be forced to make compromises in negotiations with potential tenants if they wish to maintain high office occupancy rates. And while the situation in 2020 looks fairly balanced, it is much more difficult to project any longer-term perspective.

The volumes of construction projects in progress or planned show that developers intend to ensure an abundant supply not only in 2020 but also for the next few years, thus the major unknown in this situation remains the demand factor. An overview of the projects in progress and those still in design stage and anticipated to be introduced to the market in 2021 and subsequent years shows that most of the projects were started without having any lease contracts with perspective tenants. Thus, if high occupancy rates are to be maintained, continuous rapid development of both local and foreign capital companies, and even decisions in the public sector are required.

The office premises sector in Kaunas is also developing rapidly. Seven projects in the country’s second largest city were completed during 2019, offering to the city a range of new and modern office premises: the business and retail centre Longas, a commercial building at Statybininkų Street, Verslo Parkas Aušra (C block), the second stage of Kauno dokas, BLC 2, Alia and Sqveras. According to Ober-Haus, these projects have added another 30,100 sqm of useful office space to the city’s market, and during 2019 the total office area increased by more than 18% reaching 199,400 sqm.

The Kaunas office space market retains a strong correlation between the newly implemented and still vacant office spaces. As a large amount of new office space came on the market during Q4 2019, the vacancy rates among office premises in Kaunas increased from 6.8% to 10.3%, as compared to 9.7 % at the end of 2018. Since the office sector in Kaunas is experiencing a period of intensive development, not all the newly opened office buildings can boast of high occupancy rates. The development of local and foreign capital entities in Kaunas is not as rapid as in, for example, Vilnius, thus the process of finding tenants for new premises takes longer thus causing observable fluctuations in vacancy rates. 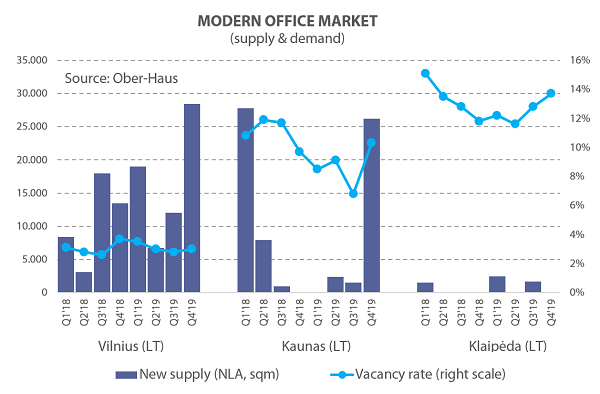 Any prospects for an increase in office rents in Kaunas remain uncertain. Apparently, the continued influx of new office spaces to the market and not so fast take-up tie developers’ hands in negotiations with potential tenants. And meanwhile the tenants will continue enjoying an increasing choice of new office premises in the city.

Another six projects offering around 39,000 sqm of useful office space are projected to be completed in Kaunas during 2020. The highlight of this recent surge in office space will be Magnum, the largest business centre in Kaunas, which is planned for completion in the first half of 2020, with an above ground floor area of just over 21,000 sqm.

During 2019, Klaipėda also enjoyed several completed projects that introduced to the market a range of modern office premises. At the beginning of 2019, the first stage of the private capital science and innovation valley Baltic Tech Park at Liepų Street was completed. A two and three-storey building was erected on the site of a former manufacturing complex housing different commercial and service companies, with the Light House coworking space occupying the largest share of office space. In Q3 2019, a commercial purpose building was opened at Dubysos Street accommodating a range of premises suited for retail activities, as well as storage facilities and office space. Ober-Haus estimates that these two projects added another 4,200 sqm of useful office space to the city’s market, and the total area of modern office space during 2019 increased by more than 6% to reach 72,800 sqm.

According to Ober-Haus, the office vacancy rate in Klaipėda increased from 11.8% to 13.7% in 2019. During the seven last quarters, the vacancy rate in the city remained within a 11-14% range and does not show any sign of clear path. The newly completed projects with modern office space do attract interest from the market, however, leasing is not always sufficiently expedient. It is obvious that the port city still shows little development on the part of existing businesses or the emergence of new companies, which creates a barrier for any faster development of the real estate sector. Still, more active developers seek to benefit from the opportunities offered by the land plots they own and promise to offer a range of new projects to the market. Klaipėda badly needs expedient, more interesting and ambitious solutions both on the part of investors and the city itself.

The second stage of the Baltic Tech Park project is anticipated to be completed on Liepų St. including the Light House Lab, a building of about 1,900 sqm that will facilitate the further development of technology and innovation companies. In the meantime, a company belonging to Stemma Group has already announced a tendering procedure for an office building in Memelio miestas project, on the right bank of the Dangė River, at Naujojo Uosto Street. The structure of about 10,000 sqm is designed to be one of the first in the Memelio miestas project to become a focal point in the further development of this 5-ha territory.

Just like Kaunas, during 2019, Klaipėda recorded some minor price changes only in the cheaper office premises segment. During 2019, the rents for B class offices increased by 3% on average, while the rents in A class office buildings remained stable. According to Ober-Haus, at the end of 2019 B class offices were offered for 6.5-10.0 EUR/sqm, while A class offices could be leased for 10.5-13.0 EUR/sqm. It is expected that prices will remain at a similar level during 2020.