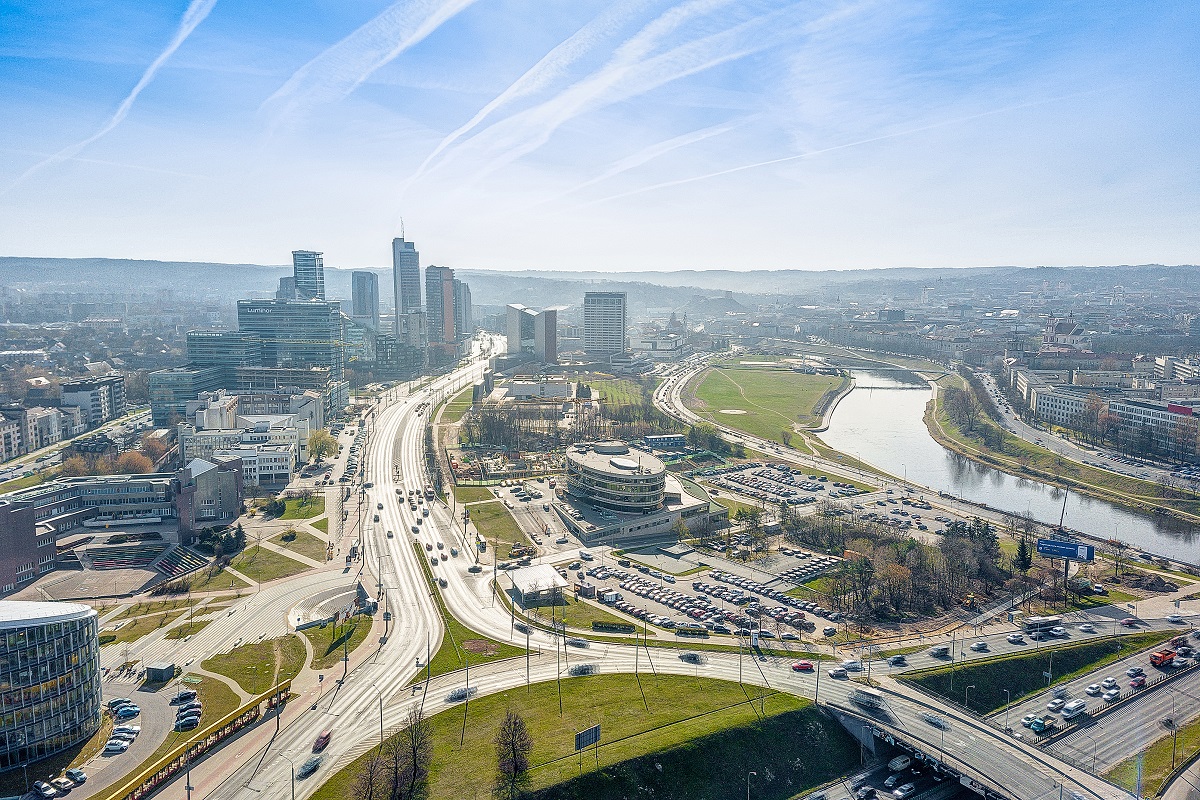 The transaction volume in the Lithuanian commercial property investment market in the first half of 2019 was much lower than expected in the sector which is currently rapidly developing and is highly active.

Although the beginning of the year saw an announcement of one of the largest investment transactions in the history of Lithuania, where the Swedish investment company Eastnine signed an agreement with the developer M.M.M. Projektai for the acquisition of three office buildings in S7 project in Vilnius, this did not significantly improve the overall investment market performance of the first half of 2019. The value of the transaction for the three office buildings on Saltoniškių Street totalled slightly over EUR 128 million, but in the first half-year an acquisition transaction for only one of the buildings was finalised (tenant – Danske Bank Global Service Centre). It is likely that the acquisition of the second building (tenant – Telia Lietuva) will be finalised in the second half of 2019 and the third building (tenant – Danske Bank) – in early 2020, i. e. after the conditions of this truly significant transaction are implemented. Therefore, only the sum of the first transaction was included in the results of the first half-year.

According to Ober-Haus, acquisitions of the modern commercial property (office, retail and industrial buildings/premises with a value of at least EUR 1.5 million) in Lithuania in H1 2019 totalled EUR 72 million, the poorest half-year indicator since 2013. The purchase transaction for the first S7 building in Vilnius accounted for half that sum. The second highest value transaction was the acquisition of the second Duetto building in Vilnius. In December 2018 it was announced that the Baltic Horizon Fund managed by the Danish investment company Northern Capital Fund would purchase an office building from the developer YIT Lietuva for EUR 18.3 million and that the transaction would be finalised after the completion of the construction of the building and moving in of the tenants, i.e. at the beginning of 2019. The remaining acquisitions ranged from EUR 2 million to EUR 4 million and involved smaller office and retail properties in the country’s capital and other cities.

After a moderate H1 2019 in the commercial real estate market for investment, large volumes of transactions are expected in H2

Looking at the prospects for H2 2019, higher sales volumes in the investment transaction market can be expected. In August 2019, a large investment transaction was announced in Kaunas, where Eften Real Estate Fund 4, managed by the Estonian commercial real estate fund management company Eften Capital, acquired the shopping centre River Mall and the business centre River Hall from Sirin Development. In addition to the transaction for the second S7 office building on Saltoniškių Street in Vilnius, which will be finalised in H2 2019, the acquisition of the second office building of the Park Town project that is nearing completion may be expected as announced earlier by its developer Darnu Group.

The acquisition of these four objects should contribute over EUR 120 million to the investment transaction volumes this year. However, looking at the record investment transactions volumes in Lithuania recorded in 2017–2018 (in 2017 – EUR 312 million and in 2018 – EUR 404 million), the data currently available suggest that it will be difficult to achieve similar volumes this year. Specifically, at least 2 to 3 large commercial property acquisitions would be required (for at least EUR 30–50 million each) in order to achieve the 2017 indicator (i.e. at least EUR 300 million).

Under the current conditions in the commercial real estate market this is achievable, because the commercial property portfolio continues to expand quite rapidly in Lithuania. It is particularly noticeable in Vilnius and Kaunas regions where new business or logistics centres are being built at a fast pace and could attract potential investors. In the meantime, property owners have real opportunities to make use of the current market rise and sell their commercial real estate at top prices of the past decade.

The developments in the most rapidly expanding commercial property sector in the country – offices in the country’s capital – in the past 12 months show that the rapid investment value growth potential in this segment has already reached its limits and any more noticeable positive change in the nearest future is hardly expected.

Although the lowest investment yield indicators during the entire history of modern commercial real estate are reported in the office market in the country’s capital (e.g. the acquisition yield for three S7 office buildings is 5.8%), we can see that in the competitive environment office rents in the country’s capital, including the rents of A class offices, have not essentially changed for four consecutive quarters. The growth in the property value has been lately determined by slightly declining yield indicators and a symbolic increase in rents in one of the most attractive segments – the top class office buildings. During the past 12 months, the capital value index for A class offices in Vilnius has increased by 3%. 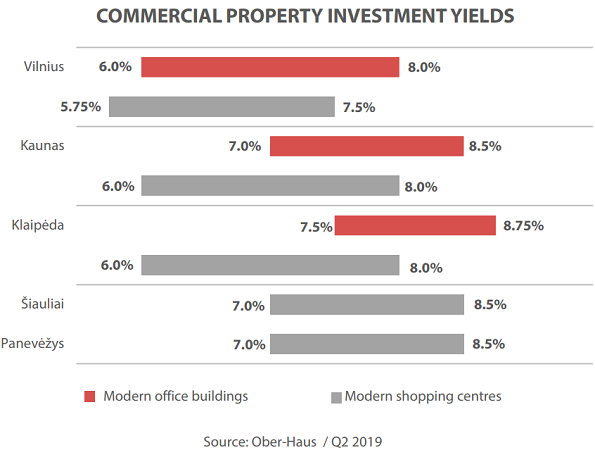 Despite the recorded very low yields in individual transactions involving the newest and the most modern buildings, in the case of the acquisition of older A or B class office buildings the buyers assess the prospects of such property (potential rental income in the future and the likely additional costs to achieve it) much more carefully and this reflects in the proposals made to property owners. That is why the investment yield gap is expanding to the detriment of older buildings.

If in the country’s capital the biggest property value hike has been recorded in the office premises sector in the past decade, so the more noticeable property value growth could be expected in the regions of the country with a faster growth potential (e.g., Kaunas) resulting both from the moderate rents increase and the decreasing yields in the most attractive office, warehousing or retail properties (most technologically advanced buildings with strong tenants).

Only after the evaluation of the data for H2 2019 and H1 2020 will it be possible to say whether the activity in the commercial property investment market manages to exceed the record highs achieved in 2017–2018.

Due to the relatively small size of the Lithuanian commercial real estate market and lower liquidity, greater activity fluctuations in small markets are a frequent and natural occurrence. However, it is likely that in the nearest future the negotiations between property owners and potential buyers will be more difficult than in the previous years. On the one hand there are the sellers who can see a very active commercial real estate market with the best historical indicators, on the other hand there are buyers who can see increasingly lower growth potential in certain property segments and a more conservative traditional financing environment.