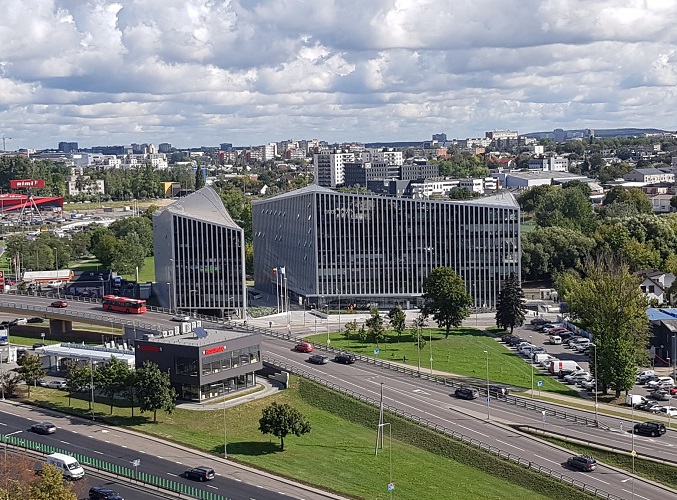 Although no major changes were recorded in the modern office market of the three major country’s cities in Q3 2019, modern office supply increased – one commercial project with new office premises was completed in each of the three cities – Vilnius, Kaunas and Klaipėda, reported in the Ober-Haus commercial market overview.

The largest project was implemented in the country’s capital city. The real estate developer, Darnu Group, completed the construction of the second building (East Hill) of the Park Town project on Lvovo Street. The building with total area of almost 15,000 sqm supplemented the market with about 12,000 sqm useful office space. The total area of usable modern office space in Vilnius at the end of Q3 totalled 756,600 sqm. “The new building did not have any significant effect on the overall market indicators because by the time it was completed almost all office space had been leased,” Raimondas Reginis, Research Manager for the Baltics at Ober-Haus, said. The building also accommodates several food caterers and a sports club.

Office tenants continued to be very active in Q3 2019. The floor area of modern office space leased over a period of three quarters in the country’s capital totalled 58,600 sqm or essentially the same as during the same period last year. According to Ober-Haus, in Q3 2019, the vacancy rate of office premises in the country’s capital fell from 3.0% to 2.8%. The vacancy rate of A class offices was 1.9% and of B class – 3.5%. Over the past decade, the vacancy rate under 3% was recorded in Vilnius only in Q2 and Q3 2018.

Quite a large number of new projects is scheduled for completion in Q4 2019 and Q1 2020, so the market will be supplemented with an impressive amount of office space. In total, up to 7 new projects or new stages of earlier projects should be completed in this period with almost 65,000 sqm of useful office space.

Despite the remaining high demand for office premises and particularly high occupancy rates, regular supply of office space in the capital has essentially stabilized rents, which over the past 3-4 years have only slightly increased. According to Ober-Haus, the office rents in Q3 2019 remained stable and at the end of the quarter B class offices rented for 9.0–13.5 EUR/sqm and A class offices – for 14.0–16.7 EUR/sqm. It is likely that in the environment of growing supply we will continue to record either stable or slightly increasing office rents in the near future.

Following the completion of the reconstruction of one of the blocks of Aušra Business Park in Q3 2019, Kaunas office market was also supplemented with new office space. The leased floor area of the complex (6 blocks) located on Vytauto Avenue totals 13,000 sqm and offers space of diverse commercial use. The complex accommodates offices, a college, a sports club, beauty and health clinics and centres, food caterers, etc. According to Ober-Haus, after the reconstruction of one of the blocks, the modern office space market in Kaunas was supplemented with approximately 1,500 sqm of useful office space. At the end of Q3, the total area of modern office space in Kaunas increased to 173,200 sqm.

Since the projects completed in the three quarters of 2019 in Kaunas were relatively small, the total area of the modern office space supplied to the market was moderate (nearly 3,900 sqm). As a result, due to the remaining activity of tenants, record low vacancy rates in the past three years were recorded. In Q3 2019, the vacancy rate of office premises in Kaunas fell from 9.1% to 6.8% and was the lowest since Q2 2017.

“Looking at the historic data of the modern office space market in Kaunas, it is clear that the vacancy rate will not remain low for long. The newly completed projects in Kaunas are usually not fully rented, therefore, with each new project there is a surge of the vacancy rate in the market. So such surge can again be expected very soon because a considerable supply of office space in scheduled for Q4 2019 and Q1 2020,” Mr Reginis said. During this period, 5 new projects or new stages of earlier projects should be completed in this period with almost 30,000 sqm of useful office space.

Like in the country’s capital city, a slight increase in rents has been recorded in Kaunas in recent years. Still, the office rents in Q3 2019 remained stable and at the end of the quarter B class offices rented for 7.0–11.0 EUR/sqm and A class offices – for 11.5–14.0 EUR/sqm. The rapidly expanding Kaunas modern office sector provides opportunities for growing companies or new entering companies to hold stronger positions in negotiating their rents.

In Q3 2019, the second building this year for commercial use was opened in Klaipėda offering modern office space. Ratuva, part of A. Gricius motor transport company group, opened a new building of over 5,000 sqm on Dubysos Street. The building accommodates premises for retail, warehousing and administrative activities. The representation of Autobrava Motors, Vadasiga furniture shop, Tece Baltikum plumbing and engineering solutions company and other companies occupy the ground floor of the building. A total of 1,700 sqm of office premises are located on the second and third floors of the building.  As a result, the total area of modern office space in Klaipėda increased to 72.800 Eur/sqm.

“Although there is some information in public space about the planned larger investments in the development of commercial (including offices) projects in Klaipėda, just eight small and medium sized projects implemented over the past decade in Klaipėda supplied only 12,500 sqm of useful office space, I .e. on average about 1,550 sqm of office space per project,” Mr Reginis said. It is obvious that the implementation of larger projects remains a great challenge for real estate developers in terms of finding potential tenants and financing possibilities for such projects in Klaipėda.